The Wheel — in collaboration with Charities Institute Ireland and Mason Hayes & Curran — today presented a response to the General Scheme of the Charities (Amendment) Bill 2022. Below is our opening statement.

Watch a video of the presentation and discussion. 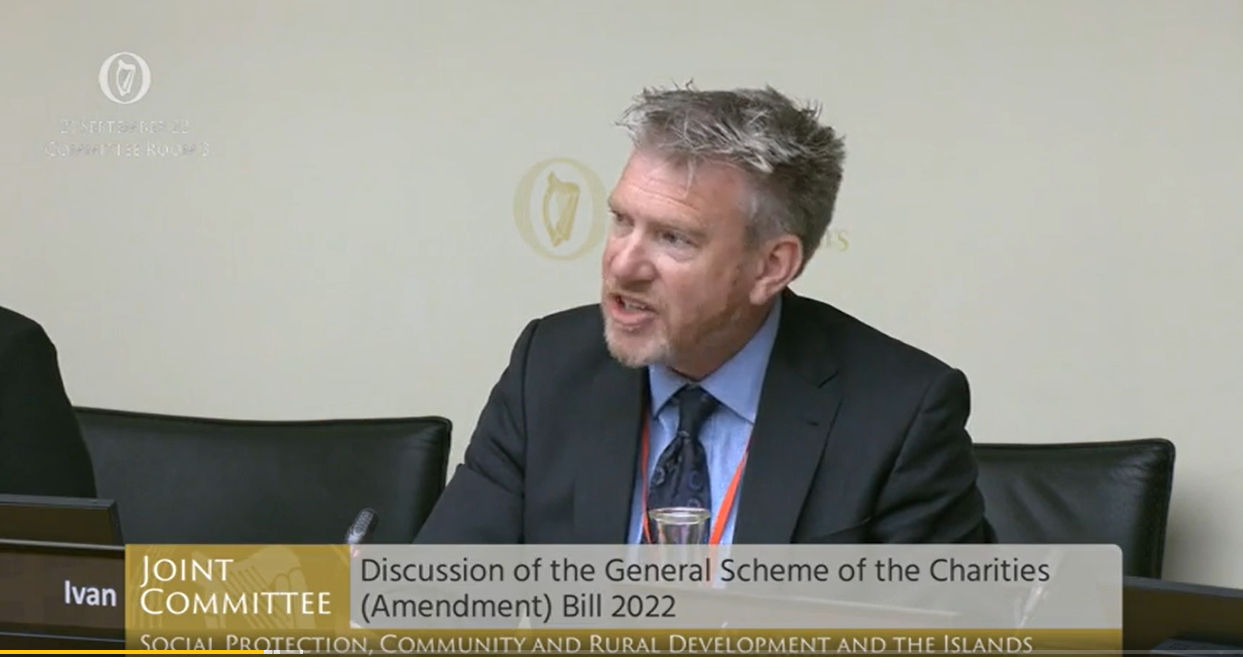 Our submission on the Charities (Amendment) Bill 2022 ("the Bill") was made co-operatively by Charities Institute Ireland and The Wheel, who together represent a very significant proportion of the registered charities and voluntary organisations in Ireland, with legal input from Mason Hayes & Curran LLP, solicitors (MHC), Ireland’s largest and leading provider of legal services to the charity sector.

We support this Bill and its objectives to further develop the regulatory framework for registered charities in Ireland. The proposals, observations and commentary that follow are intended as constructive and informed inputs into the development of the legislation. We are acutely aware that the Bill represents the sole opportunity for legislative development and amendment for the short and medium terms. There will only be one opportunity to get this right for the Charities Regulator and for our sector.

The charity sector is exceptionally diverse, with a long history of making an important and unique contribution to our economy, community life and civil society. Charities deliver a wide range of supports and services, including the relief of poverty, the promotion of education and health, protection of the environment and the support of our most vulnerable citizens. There are almost 10,000 registered charities and a further 20,000+ organisations in Ireland’s wider non-profit sector. Some key statistics for the sector include:

Many of Ireland’s charities are funded or part-funded by the State and they form a critical part of our economic and social infrastructure. The Wheel and Cii are tasked by our members to represent their views, amplify their voices, and ensure that proportionality, parity of esteem and respect are core tenets of and expectation from engagement with policymakers and officials.

This legislation is long-awaited by our sector, and we are encouraged by many of the positive proposals, such as:

There are, however, several areas where significant concerns have arisen with the proposed provisions. In addition, it is our view that some of the proposals could overload the Charities Regulatory Authority with an unwieldy administrative burden, producing limited regulatory value and, in any event, would not be possible without providing substantial additional resources.

We agree with Minister Joseph O’Brien when he says that it is important that the legislation “strikes the right balance between proportionate regulation and governance, ensuring that a reasonable and fair approach is at its core”. In its present form, this draft legislation does not, in our view, fully support this objective.

We have named the top five issues which we believe could adversely affect charities in their day to day work and our sector’s ability to recruit and retain trustees to our boards, without whom charities cannot function.

1)  The proposed extension of very significant additional powers of direction and sanction to the Charities Regulator: in particular the, in our view, disproportionate power to de-register charities for a range of minor non-compliances.

2)  Insufficiently strong appeals processes and insufficient recognition of potential reputational damage to charities occurring prior to any finding of fact during an investigation.

3)  The, in our view, unreasonable and likely unworkable requirement for charities to inform the Charities Regulator of “significant events” (where “significant” is not sufficiently defined) that have already, or might in future, negatively impact the charity.

5)  The, in our view, unworkable requirement for any change, however minor, to a charity’s constitution to be approved in advance by the Charities Regulator.

In the Legal Section of our submission, MHC outline legal amendments which could be considered to address the major policy issues flagged as well as a series of standalone legal issues which are apparent from our review of the Bill. Below is a brief summary of the most problematic Heads.

Charities Regulator is not obliged to notify Gardai or other relevant authorities about suspected offences by a charity, but instead has discretion about whether to do so in cases of breach of the Charities Act.

This reflects the introduction of discretionary reporting of suspected charity law offences. We envisage that problems could arise if the Regulator is not obligated to share information with An Garda Síochána. We suggest that a positive obligation should be imposed on the Charities Regulator to share information with the appropriate authorities where a suspected offence under the Charities Act 2009 has occurred.

This proposed amendment inserts a new legal obligation that a charity shall not amend its constitution without the prior approval of the Charities Regulator.

We are concerned that this provision is not proportionate as it requires the prior approval of the Charities Regulator to any change to a charity’s constitution, however minor or inconsequential. It would be unworkable in practice and reflects a significant extension of Regulator’s powers in terms of how charities define themselves.

Grants the Charities Regulator wide-ranging powers to make changes to the information in the register, without first consulting with the charitable organisation concerned.

Streamlines process of removing charities from the Register and establishes the power of the Charities Regulator, rather than the High Court, as being first adjudicator.

Removal from the register is an extraordinarily serious sanction, with far-reaching consequences. Charities are only permitted to operate in Ireland if they are on the charities register. This removes several important steps in de-registering a charity and could lead to a sudden shutdown of public services, the immediate loss of jobs and the suspension of all financial transactions and board status.

This introduces an obligation for charity trustees to notify the Charities Regulator, as soon as is practicable, where there are reasonable grounds to believe that a “significant event” has occurred, or is likely to occur, in respect of that charitable organisation.

There is no definition provided for what constitutes a “significant event” outside of three general categories. The provision creates a circumstance where trustees could be retrospectively held accountable for not reporting something later determined by regulator to be “significant”. We believe that this will place a disproportionate burden on charity trustees who must decide, in the abstract, whether a potential set of circumstances qualify as a serious incident. This may become one of several administrative burdens placed on the Regulator, as concerned boards report on all manner of possible “significant events” in their need to comply.

Directions arising from an inspector’s report and new offence of failure to comply with a direction of the Charities Regulator.

This gives the Regulator significant discretionary power. We believe that such an offence should only arise after significant and protracted engagement with the charity, and after a sustained failure by the charity to engage with the Charities Regulator.

New section is to address payments made to charity trustees other than for fulfilling their role as trustees.

Many charities already have provisions in their constitution that permit, (or oblige), for instance, the CEO to be a charity trustee. Additionally, the proposal to require advance approval to any arrangement between a charity trustee or any person “personally connected” to that trustee relies on a very broad definition. There will be circumstances in which it is good governance practice, and represents the best outcome for the charity, to enter into an arrangement with trustee.

The key concerns summarised here centre on the general extension of the Regulator’s discretionary powers, which we believe could potentially undermine the independence and authority of charity trustees. There will also be a significant felt increase in the formal responsibilities of trustees, which might further deter people from carrying out these vital roles.

We believe there is a need for a more supportive rather than adversarial approach to regulation, in order to ensure that the sector functions effectively. Any sanctions should be accompanied by a positive obligation to engage with charities. There is also the risk that some of these amendments will place an unnecessary burden on both the Regulator and on charities themselves, with no additional protection of the public interest or the advancement of a proportionate regulatory environment.

It is the view of the parties to this submission that the Bill presents a critical opportunity to enhance our legal framework, to strengthen its effectiveness and to ensure that it is transparent, fair and proportionate. Our suggested inputs reflect the need to achieve a balanced regulatory regime that considers the practical reality of the limited resources of both the Charities Regulator and the charities that make up this vibrant sector.

Many Irish charities are small, and all are governed and led by volunteers. Many of them have limited access to legal advice. We need a system of regulation that works for all charities and a regulatory framework that provides absolute clarity as to the legal obligations applicable to charity trustees.

Let us remember that, above all, charity trusteeship is a public service, and one that is often not acknowledged, understood or valued. Trustees are the guardians of charity and trusteeship requires personal sacrifice. It means people giving time and energy that might otherwise be invested in their career, or spent with their family and friends, in serving their charity and the people it supports. Without competent, skilled and committed trustees, the charity sector cannot function.

We advocate for a fair and balanced regulatory system, which will be equally robust and supportive, protecting and promoting the compliant charities and taking swift action against the unregulated intentional wrongdoers or the grossly negligent.

We appreciate this opportunity to engage with the Joint Committee on developing this important legislation for our sector, which provides such vital services, supports and employment across Ireland.