We Came, We Saw, We Learned: The Wheel’s Study Trip to EU Institutions, 2020 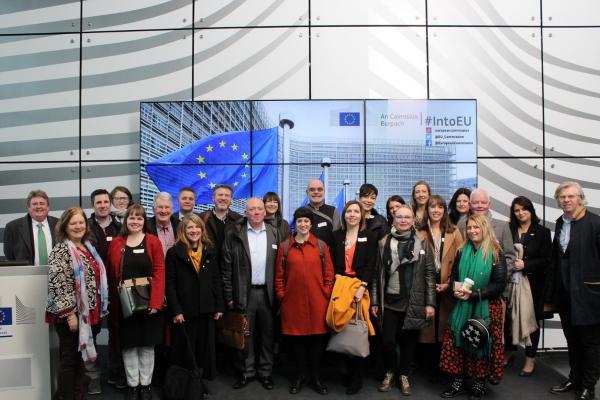 For the second time in two years, members of The Wheel enjoyed a two-day visit to the EU institutions in Brussels from 17–19 February 2020. Kindly hosted by the EC Representation in Ireland and the European Parliament Liaison Office, the action-packed trip was specially designed to suit the interests of civil society in Ireland, covering topics such as social enterprise, early years education, climate action and the new EU priorities and associated budget planned for 2021–2027.

The study trip formed part of The Wheel’s European Programme which offers advice, training, guidance and support to nonprofits in Ireland to access EU funding and better understand European policy development. Since 2015 The Wheel’s EU programme has supported numerous organisations to access EU funding, especially from the Europe for Citizens programme. Several beneficiaries of Europe for Citizens joined the study tour, extending their learning and considering how they could further expand their presence in the EU.

‘You’ve picked an exciting week to come to Brussels!’

On the first day of our trip, we gathered at the European Commission’s famous Berlaymont building for a day of learning. A very packed agenda was put together for the group by the EC Representation in Ireland, covering important topics of major interest to group such as: the UK’s new relationship with the EU, early years education, the EU’s Green Deal, social enterprise, and new priorities under the European Social Fund.

The most popular presentation by far however, was that of Sylvain Ylieff, Deputy Head of Unit at DG Budget, on the contentious EU budget negotiations and new Multi Financial Framework (MFF) which will span 2021–2027.  The departure of the UK from the EU means creates a hole of up to €75 billion in the EU’s €1 trillion budget for 2021– 2027.  What countries will make up the shortfall? “You have chosen an exciting time to come to Brussels”, he joked, for as we sat in the European Commission building, EU leaders were boarding planes, ready to go into battle.

So while we absorbed the figures and statistics in Sylvian’s excellent presentation, outside council workers and Belgian police officers erected metal barriers and security gates on the streets of the Schuman district in preparation for the arrival of leaders from across the EU. The marathon EU summit was scheduled for the next day where it was hoped an agreement could be reached on the seven-year budget. Once that deal is done, it permits the European Commission, essentially a civil service to the EU, to move forward with the implementation of new European programmes, ready to launch in 2021.  Would they agree? Or would they delay the process further? We waited to find out.

Day 2 of our trip involved a visit to the European Parliament building, a hive of activity. As we marched through the bustling ground floor we passed TV crews, harried journalists, and PAs, rushing about, the frenzied ‘busyness’ palpable.  After a tour of the Parliamentarium, we were lucky enough to meet no less that ten Irish MEPs who talked us through their journey to Europe, policy specialisms and Committees they sit on plus other observations.

Almost all outlined how Irish nonprofit organisations can engage with them at a practical level and have their particular queries raised at EU level.  It was noted by our group that 80% of all legislation adopted in Ireland originates from EU directives, so the importance of the parliament became more pronounced in our eyes. Most of the MEPs complimented the work of The Wheel in promoting the value of the European Parliament as a democratic instrument, particularly last year in the run up to the European elections.  MEP for the South, Grace O’Sullivan, was particularly positive, stating, “The Wheel has been of great support to me”.  She encouraged the group to communicate directly with her about issues of concern to them, and to relate them to debates and committee subjects being discussed in the parliament.

Last Stop! A visit to the ‘Perm Rep’

By the end of the second day of the study trip, our 24-strong group of voluntary sector leaders were certainly tired but not yet done.  Our last visit was to the Ireland’s Permanent Representation to the EU, based not far from the Parliament building. This entity, often known as the ‘Perm Rep’ is the State’s largest overseas mission in the world, with staff assigned from almost all Government departments. The Perm Rep is dedicated to pursuing, securing and protecting Ireland’s interests and objectives in the EU.

The team at the Rep includes one or more officials from almost all Government Departments. The Perm Rep is Ireland’s biggest diplomatic mission, negotiating and lobbying on behalf of Ireland.  We met with attachés Sarah McCabe and Fiona Ralph who explained how they interact with the EU legislative process and participate on Working Groups related to various policy issues.  They engaged in an excellent discussion with The Wheel group and from this we were reminded of the importance of national level advocacy, as although they are based in Brussels, they take a steer from their departments at home.

As we waited to board our plane at Zaventum Airport, our group reflected over a beer on what the highlights of the trip had been, what new information had we gleaned and what we planned to do with it. The overwhelming reaction was extremely positive, with participants pledging to engage even more in European funded programmes and to liaise with their MEPs more actively in future. Many expressed real gratitude towards the ten Irish MEPs who had taken time out to meet the group and listened to our concerns and advocacy asks.

Summing up, The Wheel’s second study trip to Brussels was a big success.  As one participant reported, “The Study Trip was a very helpful learning experience and excellently organised. The best of its kind I have every been on by far. Very well done to all concerned.”

On the back of this success, we will seek out more knowledge-sharing experiences like this one and study tours that motivate and inform our members.

And as for the EU budget — has a deal been done? Was the EU summit a success? Unfortunately, the two day gathering of EU leaders that took place just as we were leaving Brussels led to nothing.  It saw a standoff between poorer member states of the EU and the “frugal four”: Netherlands, Denmark, Austria and Sweden. While Ireland has now become a net contributor, our government’s current position is to willingly contribute more to the EU budget over the next seven years, but not if that means payments to Irish farmers are cut back.

A date for a follow-up meeting is yet to be set. And as this negotiation drags on, it means potential delays to the rollout of European Union programmes from which our members wish to benefit, including the European Social Fund, Interreg, PEACE PLUS, and ERASMUS+. At The Wheel’s EU Programmes desk, we will keep track of these developments and bring you news as it emerges.

And what of a date for a follow-up Study Trip to the EU Institutions in 2021, when the EU programmes are launched and the budget agreed? Watch this space.

Want more information? The Wheel is happy to share the presentations from the EC that the study trip group received in Brussels. Simply contact Europe@wheel.ie