Half of TDs Elected Pledged Their Support for Charities, Community and Voluntary Organisations, and Social Enterprises

Posted on
13 Feb 2020
by
Sarah Monaghan - Campaigns Manager, The Wheel

What an eventful few days it has been! Before we all move into the next phase, it is important to acknowledge the extraordinary support shown by hundreds of people for the Stronger Communities, Stronger Ireland campaign.

Those working and volunteering with charities, community and voluntary organisations, and social enterprises, and those who benefit from this work - rowed in behind the campaign and shared its message with candidates, friends and family, on the doors and on social media.

By the end of the campaign, an incredible 207 candidates had signed up in support of the following key manifesto asks:

Of those 207 candidates who signed our Stronger Communities, Stronger Ireland manifesto – 79 were elected to the 33rd Dail Eireann. This means that just shy of 50% of elected TDs united in their support for charities, community and voluntary organisations, and social enterprises by signing – that is almost enough to form a Government!

We have all heard debates among candidates, and political parties, over how they would support the areas of health, housing, climate change, crime and many more, should they be elected. For those of us working every day in charities and community and voluntary groups, these big issues are not just a political debate – these are the realities we are faced with every single day. We now look forward to our elected TDs representing these big issues by moving from debates into action.

See the full breakdown of (now elected) candidates who signed our manifesto here. 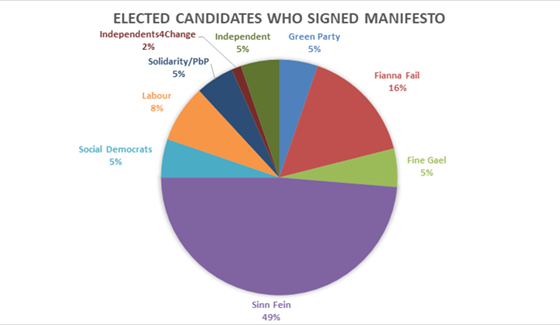